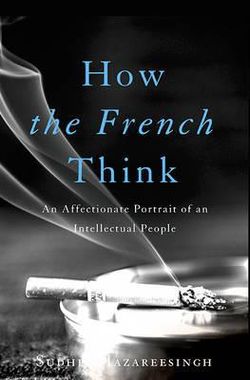 How the French Think: An Affectionate Portrait of an Intellectual People
Artist/AuthorSudhir Hazareesingh
Released on2015
Read

In How the French Think, the internationally-renowned historian Sudhir Hazareesingh tells the epic and tumultuous story of French intellectual thought from Descartes, Rousseau, and Auguste Comte to Sartre, Claude LÃ©-Strauss, and Derrida. He shows how French thinking has shaped fundamental Westerns ideas about freedom, rationality, and justice, and how the French mind-set is intimately connected to their own way of life-in particular to the French tendency towards individualism, their passion for nature, their celebration of their historical heritage, and their fascination with death. Hazareesingh explores the French veneration of dissent and skepticism, from Voltaire to the Dreyfus Affair and beyond; the obsession with the protection of French language and culture; the rhetorical flair embodied by the philosophes, which today's intellectuals still try to recapture; the astonishing influence of French postmodern thinkers, including Foucault and Barthes, on postwar American education and life, and also the growing French anxiety about a globalized world order under American hegemony.

While I enjoyed the book (up until the conclusion), this was an excellent primer on the celebrity philosophers and their direct (or indirect) effects on the french social scene and overall social truths. If this book had been titled anything else, then this would be an excellent book - but as the core concept on 'how the french think' it runs a bit flat. This is contemporary view of how the social elite thought throughout history but touched very little on the every day citizens or world that directly affected them.

This is a history of French philosphy, but any attempt to strive off this path does not fare well and will cause the reader to feel less emotionally involved as one would want to be. The writing is exceptionally well done, but until the conclusion you would feel hopeful. The author uses the last chapter to usher and pigeon hole a concept that 'society is failing' and that everything is worse than it ever has been without giving any specific reasons. He does try to find a tone in a paragraph where he is optimistic but the chapter itself betrays this pitiful attempt. The author seems to live in a world-view that 'philosophy is dead, long live the old!', if you ignore the last two chapters and view this as a history of the French bourgeoisie then this is a book that I would recommend, otherise you should temper your expectations.